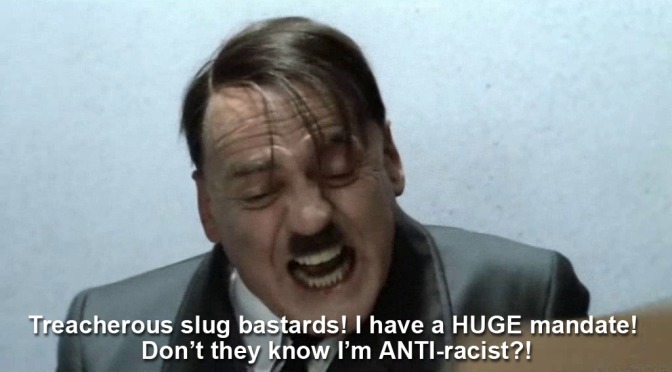 Young Labour has come under fire today for tweeting a meme parodying Jeremy Corbyn’s reaction to the recent defection of 8 of his MPs to form a new Group in Parliament.

The meme takes a famous scene from the film ‘Downfall’ in which the Fuhrer bursts into an explosive rage upon receiving news that  he is about to lose military control of Berlin.  Young Labour tweeted a version of the meme in which Jeremy Corbyn (or Hitler, as he appears in the GIF) sends everyone out of his bunker except his inner circle of Seamus Milne, Chris Williamson, Len McClusky, Ken Livingstone and George Galloway.  He then launches into a tantrum at the news that members of his party have defected, and refers to the wayward MPs as ‘treacherous bastards’ and ‘contemptible minnow slugs’ that ‘must be crushed’.

A spokesperson for the Labour leader has issued the following statement:  “Jeremy apologises on behalf of the party for any offence caused by this tweet, and underlines that he is a lifelong nice man who is utterly appalled by the nasty things and is therefore in no way responsible.  He would like to make it clear that the 8 MPs have defected, and not defecated, as was reported on the BBC’s news website in an unfortunate typing error.  He also notes the ill-judged timing of the tweeted meme, which comes at a time of heightened sensitivity amongst many communities following the recent death of Swiss-German actor Bruno Ganz, who played the beleaguered Hitler/Corbyn character.”